Question 1.
How are characters created by Binary Numbers? What are its different codes? Explain with examples. (UP 2011)
Answer:
Computer Code: Computer codes are used to convert data into binary form to make the computer understand it. Apart from this, they are responsible for error-free signal flow in the computer. Three popular computer codes are:
BCD (Binary Coded Decimal): It is one of the earliest developed (UPBoardSolutions.com) memory codes. In this, every digit is converted into binary form separately:
e.g., 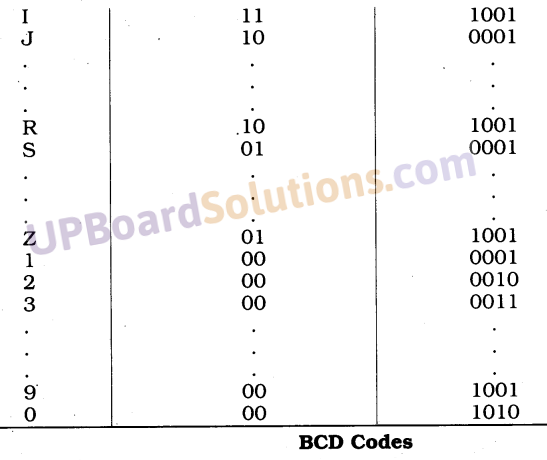 EBCDIC (Extended Binary Coded Decimal Interchange Code): BCD can convert only 64 characters but we use more than 64 characters in computer to represent data. To overcome this problem, 2 more bits have been added to the zone bit to develop new 8-bit code and, that is why it is known as extended binary coded decimal interchange code. EBCDIC is 8- bit code which can encode 28 = 256 different characters. It is similar to BCD in working but it has 4 bits in bit zone. To understand more table is given below: 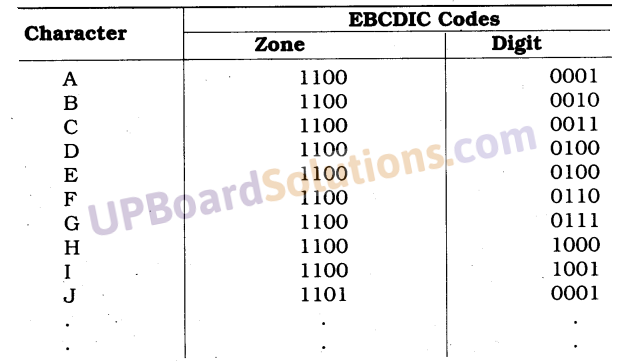 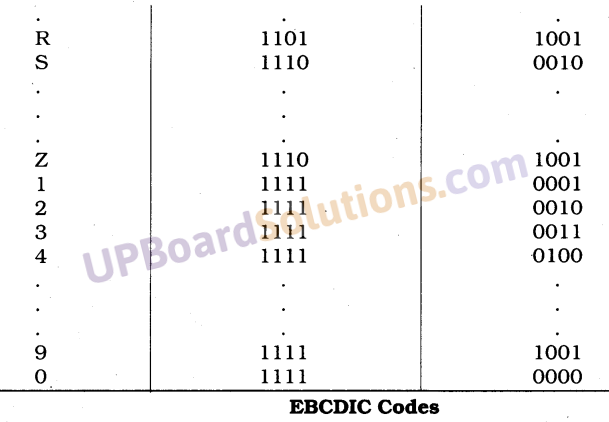 ASCII (American Standard Code for Information Interchange): This code is the most popular and widely accepted computer code. It is the standard code for computers, developed by the American National Standards Institute in the year 1963 for (UPBoardSolutions.com) encoding different characters in the computer. It is used by almost every manufacturing company. ASCII codes are of two types:
(a) 7-bit Code: To encode 27 = 128 characters with 3 bits in zone bit and four in character zone. 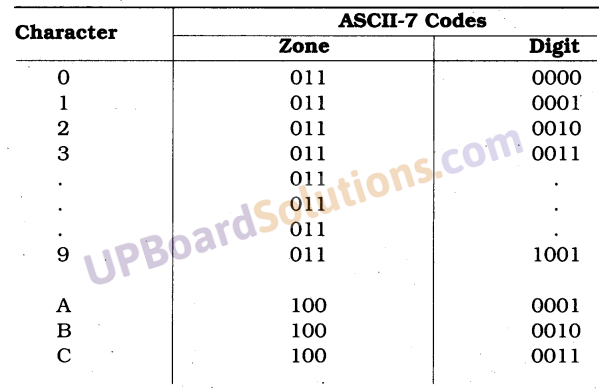 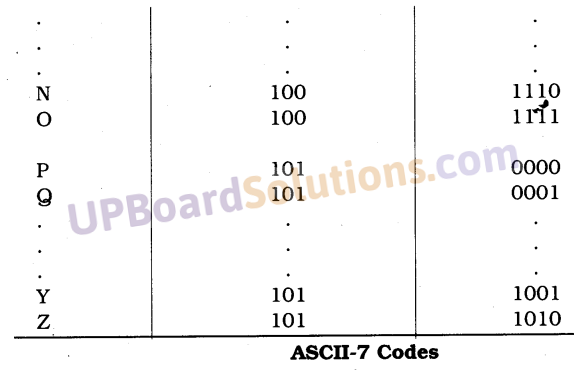 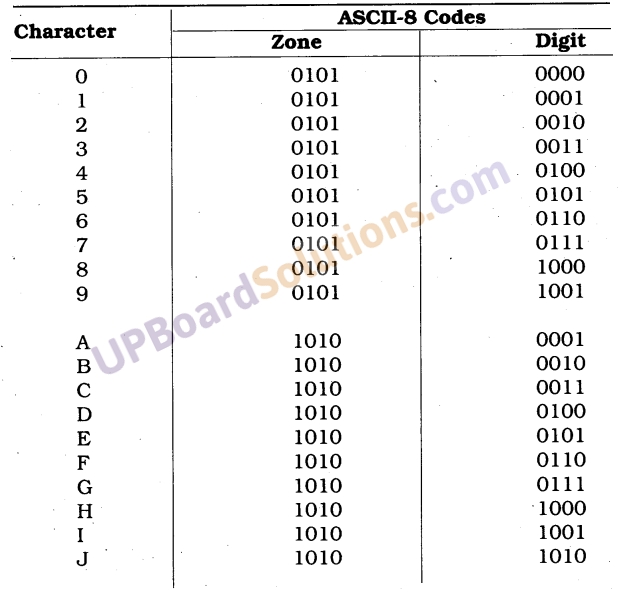 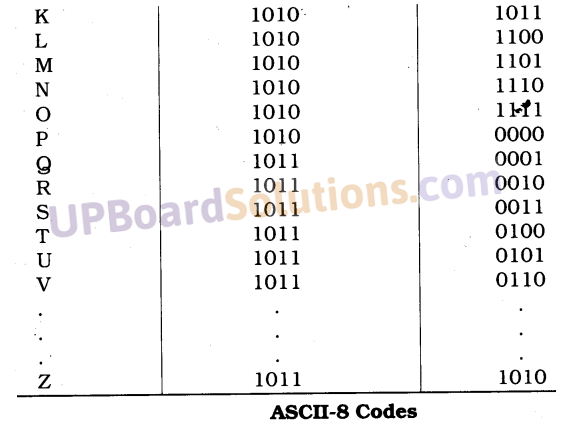 What is 5/8 as a decimal you ask? Converting the fraction 5/8 into a decimal is very easy.

Question 2.
Define character representation in computers. (UP 2008)
Or
What is meant by “character representation”? Explain one such code in detail. (UP 2009)
Or
What is meant by character coding? Explain one coding methods in detail. (UP 2016)
Or
What is Character Representation? (UP 2018)
Answer:
Character Representation: Physical devices used to store and process data in computers are two-state devices. A switch, for example, is a two-state device. It can be either ON or OFF. Electronic devices such as transistors used in computers must function reliably when operated as switches. Thus, all data to be stored and processed in computers are transformed or coded as strings of two symbols, one symbol to represent each state.

Coding of characters has been standardized to facilitate the exchange of recorded data between computers. The most popular standard is known as ASCII. Each letter is a unique combination of Binary Digits (BITS). That is, each letter (UPBoardSolutions.com) is a group of charged and uncharged transistors and it is grouped in such a way that a particular combination represents a specific character. A group of 8 BITS which is used to represent a character is called a byte. The length of 1 word is called word length which ranges from 1 byte to 64 bytes.
The internal code representation of string HARSH is:

2. Positional Number System: In a positional number system, there are only a few symbols (UPBoardSolutions.com) called digits, and these symbols represent different values depending on the position they occupy in the number.

The value of each digit in such a number is determined by three considerations :

The various positional systems in use are:

AND Operator: An AND operator is represented by the symbol ‘.’. Basically AND operator is used to performing logical multiplication. A, B, and C are three logical variables, where A, B, are input variables and C is the output variable. We can define the AND operator by listing all possible combinations of A and B and the resulting value of C in the operation A.B = C.

It may be noted that since the variables A and B can have only two possible values (0 or 1) so only four (22) combinations of inputs are possible as shown in the following table. The resulting output values for each of the four input combinations (UPBoardSolutions.com) are given in the table. Such a table is known as the truth table. Thus, the table is the truth table for the logical AND operator. 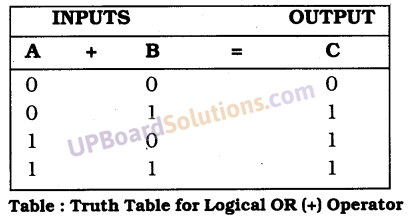 Question 6.
What are the different Gates in Boolean Algebra? (UP 2004, 05, 07)
Or
What is ‘Truth Table’? How is it helpful in understanding GATES? (UP 2006)
Or
Explain the working of a NAND Gate. Give its two application. (UP 2009, 10)
Or
How can you show that NAND is a Universal Gate? Explain with diagrams and truth tables. (UP 2011, 19)
Answer:
Truth Table: A table that shows all the input-output possibilities of a logic circuit is called a truth table.
There are several types of the truth table. AND, OR, NOT, NAND, NOR, XOR, XNOR Gates are described below:
(a) AND Gate: In English language, Input A is ANDed with Input B to get output Y.

The truth table illustrates four ways to express the logical ANDing of A and B.
The AND Gate works on the principle that output will be high when all the inputs (UPBoardSolutions.com) are high otherwise output will be low.

(b) OR Gate: In OR Gate, input A is ORed with input B to get output Y.

The OR Gate works on the principle that, if anyone input is high, the output will be high. Thus, the only case when output will be low is when all inputs are low i.e., 0.

(c) NOT Gate: The NOT Gate is an electronic circuit that generates an output signal which is the reverse of the input signal. A NOT gate is also known as an inverter because it inverts the input.

(d) NAND Gate: A NAND Gate is a complemented AND gate. That is, the output of NAND Gate will be 1 if anyone of the inputs is 0 and will be 0 when all the inputs are 1.

(e) NOR Gate: A NOR Gate is a complemented OR Gate. That is, the output of a NOR Gate will be 1 only when all inputs are 0 and will be 0 if any input represents a 1.

(f) XOR Gate (Exclusive-OR Gate): XOR Gate is a combination of AND, OR, and NOT (UPBoardSolutions.com) Gates. symbol denotes XOR operation. This Gate works on the principle that if an odd number of inputs are 1, the output will be 1 otherwise output will be 0. 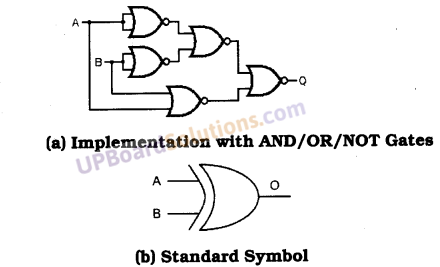 As observed from the truth table, the output is 1 when odd numbers of inputs are 1.

(g) XNOR Gate (Exclusive-NOR Gate): Similarly, XNOR gate is also formed with a combination of AND, OR, and NOT gates. symbol denotes XNOR operation. Since this gate is the inverse of XOR gate, the output will be 0 when odd numbers of inputs are 1 otherwise output will be 1. 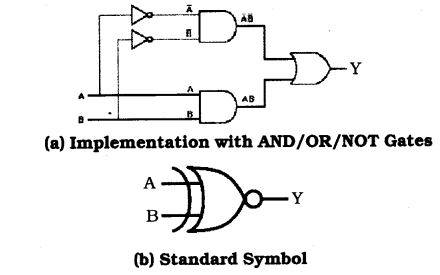 Question 7.
Explain the basic features of ASCII Code. (UP 2005, 08, 09, 10)
Or
Explain in detail the features of the ASCII character code. (UP 2007)
Answer:
ASCII: Binary numbers are coded to represent characters in the computer memory. Several codes are used for this purpose. One most commonly used code is the American Standard Code for Information Interchange (ASCII). ASCII has been adopted by several American computer manufacturers as their computer’s internal code. This code is popular in data communications, is used (UPBoardSolutions.com) almost exclusively to represent data internally in microcomputers, and is frequently found in the larger computers produced by some vendors.

Now if we convert 65 into Binary form we get 01000001 → 1 byte
In the same way, every character has its own ASCII value after converting into binary code stored on the computer.

Plus a carry of 1 to next higher column. Carryovers are performed in the same manner as in decimal arithmetic. Since 1 is the largest digit in the binary system, any sum greater than 1 requires that a digit be carried over.
Example:

Binary Subtraction: From the following table, it is clear that the lower digit is subtracted (UPBoardSolutions.com) from the upper digit. If the lower digit is larger than the upper digit, it is necessary to borrow from the column to the left which equals to 2 (10).
0 – 0 = 0
1 – 0 = 1
1 – 1 = 0
0 – 1 = 1
with borrow from the next column. Thus, the only case in which it is necessary to borrow is when 1 is subtracted from 0.
Example 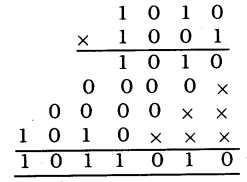 Binary Division: Binary division is, again, very simple. As in the decimal system (or in any other system), division by zero is meaningless, here too. Hence, the complete table for the binary division is as follows:
0/1 = 0
1/1 = 1
The division process is performed in a manner similar to the decimal division.
Example:

Question 1.
What is the order of precedence in Boolean Algebra? (UP 2007, 09, 19)
Answer:
In a Boolean expression, many operators are used. The order in which they are operated is known as precedence. The precedence of Boolean operators is as follows:

Question 2.
Define the Principal of Quality. (UP 2016)
Answer:
The Huntington Postulates have been listed in two parts: (a) and (b). One part may be obtained from the other if ‘+’ is interchanged ‘+’ with ‘.’ and ‘0’ in interchanged with ‘1’ and vice-versa. This important property of Boolean Algebra (UPBoardSolutions.com) is called Principle of Quality. This principle ensures that, if a theorem is proved using the postulates, then a dual theorem obtained interchanging ‘+’ with ‘.’ and ‘0’ with ‘1’ automatically holds and need not be proved separately.
The table below lists theorems and their corresponding dual theorems.

Question 4.
Write AND and OR LAWS of Discrete mathematics.
Answer:
AND LAWS: AND LAWS are the laws which work on logical multiplication. They are:
1. x . 1 = x
2. x . x’ = 0
3. x . x = x
4. x . 0 = 0
“The tabular representations of truth values of a compound statement based on the truth values of the prime connective ness of statements is called TRUTH TABLE.”
Truth table consists of horizontal lines (rows) and vertical lines (columns). If a compound statement consists of N statements, the number of rows will be 2^N. The number of columns in a truth table depends upon the number of relationships between these statements.

Question 4.
Give the name of the Boolean operators. (UP 2014)
Answer:
AND Operator, Or operator and NOT operator.

There are four alternative answers for each part of the questions. Select the (UPBoardSolutions.com) correct one and write in your answer book:

UP Board Solutions for Class 10 Computer Science

UP Board Books | UP Board Solutions Class 6 to Class 12